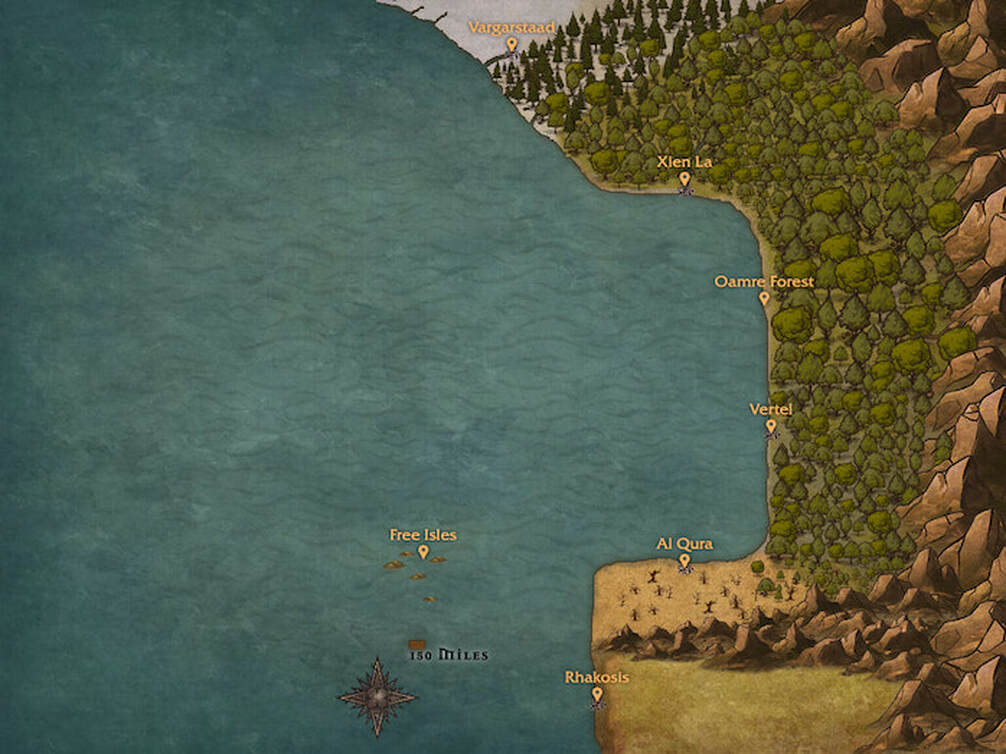 A topic of conversation amongst the players has been the scale and layout of the world map. The map covers roughly the area from the equator to the arctic circle of the world. To the north of the map is ice and snow in an area claimed by the Skenden but poorly explored. The known edge of the ice fields abuts an active volcanic range said to contain the home of the Lord of Flame. South of Rhakosis the desert continues until it runs into another branch of the great mountain range that borders the world. Farther south are sheer cliffs and turbulent waters as far as anyone has cared to explore, including the Entrance to the Sea Lords' Hall, a location visited by our intrepid adventurers.

The great mountain range that forms the eastern border of the known world has so far been an ever present if barely explored facet of the eastern view. Of the explorers who have set out to conquer the great range, those that have returned reported sheer cliffs and dangerous, unstable terrain. Many never returned, though their final fates are unknown. Did they perish in route, to some dangerous bandit or fel creature? Did they make it to the mountains, only to fall to the precarious climb? Or did they cross the mountains to some undiscovered fate on the other side? Who can know?

Another facet of the map, and one that bugs our intrepid Captain's player, is the smooth nature of the coastline and the right angles it forms along the Oamre and Dascean forests. There is a simple reason for this, though one that is unknown to the players and characters, and one that is unlikely to be fully explored in any given campaign. The reason has to do with the history of Nyasia pre settlement by the peoples of the Old World. That reason, like many others, will likely remain one of the unsolved mysteries of Nyasia.