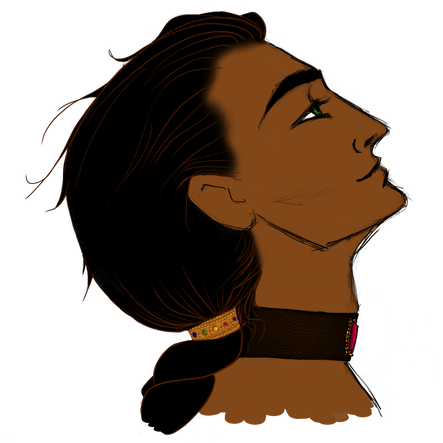 Ratna Katara Akash Darsham Rakshasa bin Ba'al is a Jinn-blood and a gem crafter in the Ash-Sh'b capital of Rhakosis. As an orphan, Akash learned the harsh realities of the world at a young age, but also benefited from quite a bit of good fortune, and the blessings of the Jinn. During the Long Dark, Akash won a wager against the owner of a mine in the mountain range north of Rhakosis. The owner, like many others, believed the world was coming to an end and wagered his entire mine, resulting in Akash acquiring a substantial amount of wealth and property.

In his youth he had found a family in the Brotherhood of the Watching Eye, an elite organization of criminals. He forged a particularly close bond with one member, Tabari, now a laid back but keen businessman who specializes in property acquisition and management. As they grew, Tabari became more involved in Brotherhood dealings while Akash focused on his gem shop and supporting Tabari’s influence in the Brotherhood.

In his spare time, Akash also enjoyed collecting bits of lore, myths, and legends from faraway lands. One document he had come across he found particularly fascinating: an ancient text which he recognized as Oami, though the mysterious nomads of the Oamre Forest had long abandoned keeping written records.

The news that Master Alim was constructing a new ship kindled Akash’s fancy for an adventure abroad. Akash set upon the prospective captain after her interview, impressing Sitara with his Jinn-blooded abilities. Recognizing his talent for shaping the air as a great boon to any ship, she agreed to invite this unusual artisan and merchant onto her crew.
​
However, Akash made certain to bring along some help. Having sent for a Brotherhood contact based in Xien La, Akash planned to bring along his Minzokan colleague under the guise of Arata Kasumi, personal accountant. The two certainly made an odd pair, the flamboyant and boisterous Akash contrasting sharply with Kasumi’s subtle and aloof manner. The two set out together on this grand adventure and as fortune would have it, Viz Leany’s crew seemed very much inclined for heroics, which Akash knew he would find much use for in his own goals.