The continent of Nyasia was discovered some 60 years ago by an Ash-Sh'b merchant ship that had been blown far off course by a sudden storm. When the storm cleared, the captain spotted something shining in the distance and altered course. As they neared, the crew realized that they had found a previously unknown land. The captain of the ship, a renowned merchant named Amir-al-bahr Aden bin Tarik Musa, named the new land Nyasia after his daughter.

The discovery of this new land set off a flurry of activity from the other great countries of the old world. Each nation launched fleets of ships to claim territory in the new world. This period of near frantic colonization lasted for fifty years. Then, some ten years ago, the ships suddenly stopped arriving. Any ship that set sail for the old world never returned. Then came the dark.

The sky was covered with dark clouds which almost completely blotted out the sun. For some six years or so the land was covered in darkness. Storms, the likes of which had never been seen, hammered the coast. Instead of rain, ash fell from the sky. Things untold of crawled and clawed their way from the dark places of the earth to terrorize the settlers. Cultural and religious upheaval followed as humanity became desperate.
​
Then, just over three years ago, the clouds broke. The sky cleared and humanity looked on with bated breath. It is a time of great change, and great opportunity, for those clever enough, strong enough, and cunning enough to make their own way in the world.

The calendar is made up of twelve months, each 28 days long, four weeks of seven days each. Each month is referred to simply as 1st Moon, 2nd Moon, etc. The new year begins on the spring equinox.

The current year is 4 AD. 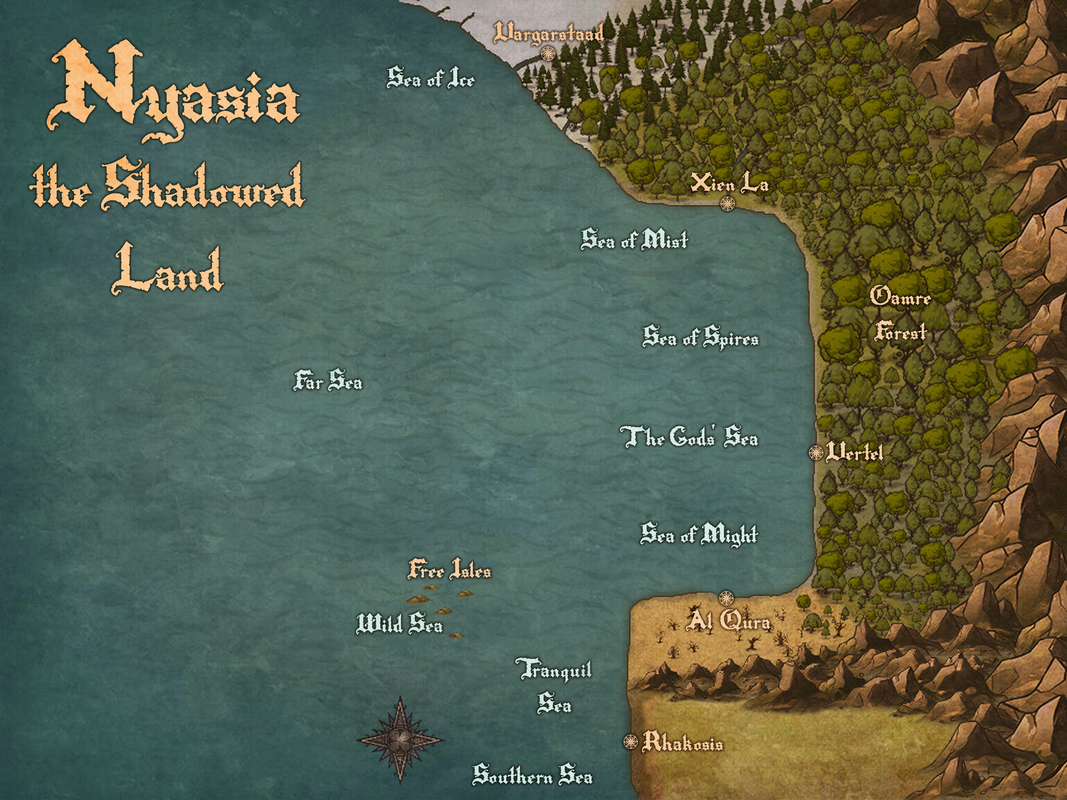 A topic of conversation amongst the players has been the scale and layout of the world map. The map covers roughly the area from the equator to the arctic circle of the world. To the north of the map is ice and snow in an area claimed by the Skenden but poorly explored. The known edge of the ice fields abuts an active volcanic range said to contain the home of the Lord of Flame. South of Rhakosis the desert continues until it runs into another branch of the great mountain range that borders the world. Farther south are sheer cliffs and turbulent waters as far as anyone has cared to explore, including the Entrance to the Sea Lords' Hall, a location visited by our intrepid adventurers.

The great mountain range that forms the eastern border of the known world has so far been an ever present if barely explored facet of the eastern view. Of the explorers who have set out to conquer the great range, those that have returned reported sheer cliffs and dangerous, unstable terrain. Many never returned, though their final fates are unknown. Did they perish in route, to some dangerous bandit or fel creature? Did they make it to the mountains, only to fall to the precarious climb? Or did they cross the mountains to some undiscovered fate on the other side? Who can know?

Another facet of the map, and one that bugs our intrepid Captain's player, is the smooth nature of the coastline and the right angles it forms along the Oamre and Dascean forests. There is a simple reason for this, though one that is unknown to the players and characters, and one that is unlikely to be fully explored in any given campaign. The reason has to do with the history of Nyasia pre-settlement by the peoples of the Old World. That reason, like many others, will likely remain one of the unsolved mysteries of Nyasia.