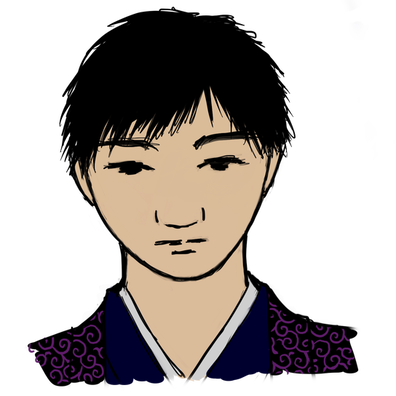 
Kasumi is plainly dressed, although his clothes are made from high quality fabric that suggest a considerable amount of wealth. Kasumi is lean but muscled due to extensive physical training, and has a large amount of burn scarring on his right arm that spreads to his torso.
What was your family life like?
Although he was born into wealth, Kasumi was not content with his surroundings. He saw his father as a spineless cheat who used his political weight to take life easy as long as he didn't rock the boat and act as a yes man for the government. Kasumi's mother, who he respected greatly, despite staying with his father, worked as a royal guardswoman for the royal family. She cared deeply for Kasumi and his sister, but was disciplined and took that to her parenting. Kasumi's sister was three years older than him, and took to a bit more adventurous occupation of private bodyguard. While she was much more outgoing and personable than Kasumi, they still got along incredibly well.


What is your socio-economic background?
Kasumi was born into a wealthy family with his father being a political figurehead. Kasumi enjoyed wealth and took advantage of that to get him into any job he wanted. He chose accounting because it distanced himself from the rich upper class, while still allowing him gain knowledge about high class marks for his night life thieving.


What are your religious beliefs?
Kasumi is an animist, however it is not a defining part of his life. He believe in spirits of the world however he do not put as much importance on them as most people would. Through his adventures he has reinforced that fact through seeing the different magical creatures and artifacts throughout the world, and has concluded that they are a different category from the spirits entirely. The being the party found in the cave, Cecarza Rozka, would be the closest thing to an actual deity that Kasumi has found, but he cannot say that it was some kind of god or jinn without further investigation.


Who are your friends and companions?
Kasumi is not well liked by most people due to his particular brand of snark and condescension, so outside the crew of the Viz Leany and his sister, Kasumi only has two real friends, Uragitta Yujin, a member of the Xien La city guard and Kasumi's mentor from the Brotherhood of the Watching Eye. However, through his travels and various life altering events, Kasumi has noticeably mellowed out personality wise, even openly speaking of his party members as friends.


What are your most prized possessions?
Kasumi is not a person of luxury, however he does enjoy trophies that are dedicated to some challenge he's overcome as a testament to his skill. He has one item that holds particular significance to himself, a small jade coin that he recently lost due to the adventures from working on Viz Leany.


What motivates you?
Kasumi was initially motivated by wealth but has since begun to realize the value of helping others for the sake of being a kind person, this revelation has primarily been brought about by his crew.
​

How far would you go to achieve your goals?
Kasumi has been responsible for a couple deaths, but typically goes out of his way to find the most non-lethal solutions to any given problem. This in no way means that he is adverse to violence or other criminal enterprises, but he would prefer his enemies jailed to deceased.

​
If you could choose how you wanted to die, how would you choose to go?
Kasumi will be satisfied with his death as long as he has completed his goals.