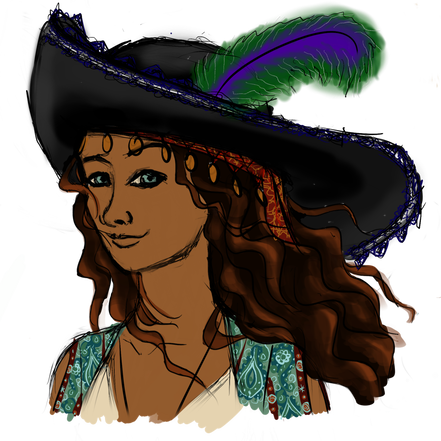 Name: Qubtan Sitara binte Nasim Hariri; Danika Derja Krejci
Nationality: Oami/Ash-Sh'b
Occupation: Adventurer-sailor
Birthday: 9th of 10th Moon
Age: early 20s
Appearance: Sitara has the bronzed olive skin and bleached dark hair of an Ash-Sh'b sailor, but her pale eyes, accentuated with kohl, give her an exotic allure. Depending on lighting and context, they appear grey, blue, or green. Standing at 5’9”, she possesses the lean stature of an athlete, and carries herself with the grace and confidence of a dancer. She typically wears a short lightweight blouse with loose pantaloons underneath a paneled ghawazee coat or vest in bright colors and patterns. Her Ash-sh'b style clothing is accented with Oami scarves, some fringed with coins or bells, worn about her hips and wrapped over the top of her head to keep her wavy, windswept hair down. She possesses a very fine hat of smooth black leather decorated with navy lace trim, silver studs holding the band, and a long plume of green and purple with streaks of silver. A copper pendant hangs from a chain about her neck, which she keeps tucked inside her blouse. She carries two scimitars of southern steel, a Skenden long knife, and a beautifully carved drinking horn hangs from her belt.
What was your family life like?
My father Nasim was a merchant-sailor from the City of Sails, and my mother is Svetlana of the Krejci clan of the Briny Fringe of the Oamre Forest. The Krejci raised me as a child, though Baba came to see us as often as he could, always bringing gifts and stories from strange, faraway lands. Once, he even brought home a boy he found in the Far North, Stig, who we took into our family. When I was twelve, I went with my father to learn the sailing trade. Once the Dark began, though, we could not see my mother often at all, and I spent much of those years in Rhakosis. It was during the Long Dark that my father went on a voyage from which he never returned.

What is your socio-economic background?
Like my father and my grandfather before him, I am of the merchant class, though I’ve always been more interested in the sailing than the mercantile aspect. I do not...currently own any property. I have been fortunate to live comfortably most of my life, both with the Krejci and at my father’s home in Rhakosis, however, I do not require much wealth to be content. A ship to call home and those I can call family are enough for me.
​
What are your religious beliefs?
I grew up amongst the Oami, and know many tales of Visatori. During the night, those who know how to can read the sacred map She gives us, one of many secrets hidden in the jewels of her cloak. I have also visited many lands, each with their own beliefs and customs. It follows that the Dreamer should appear differently to the peoples of Nyasia. Just as one should never mistreat a host in their own home, one should respect the ways those in other lands have found to honor the Her. After all, we are all walking the Dream together.

Who are your friends and companions?
My brother Kannuki has been my steadfast companion for these past few years. We met outside a small fishing village south of Xien La when a group of small-minded people mistook a great, hulking man for a monster. He may seem intimidating at first, and he is definitely a fierce fighter, but once you come to know him, you’ll see that he is also kind.

​There are those who have joined me since I became Captain of Viz Leany:
Akash, a Dreamwright who can shape the winds, was the first of my chosen crew. Something of a legend keeper and treasure seeker, Akash had an appreciation for adventure to match my own. Through our journeys, Akash's curiosity led us to many strange and wondrous things, and even uncovered legends he sought: the mysterious Biterie Cerule, the Stone of the Sky, as well as a being we believe to be the divine Cecarza Rozka. After our excursion to investigate collapses in his mine, and what came to light, Akash has decided to remain in Rhakosis to attend to his affairs.
Kasumi was hired on by Akash to be his personal “accountant,” though we know now he was called from Xien La for other reasons. Kasumi revealed to myself and Mesi that he and Akash were connected through a mysterious criminal group called the Brotherhood of the Watching Eye, which...explains his talents outside of his ledgers. A man of science, he is not so much driven by curiosity at the wonders of the world as a need to quantify and define them. In spite of his impassive and detached demeanor, he has proven himself a loyal, even compassionate companion. I daresay he might even be fond of us.
Mesi is similarly reserved in manner, I think from a soldier’s discipline rather than from lack of feeling. Under her cool demeanor lies great passion and righteousness. She is the most reticent of us, but when she speaks, it is with earnestness and conviction. It is understandable she would be wary, given her history and status as a fugitive from Al Qura, but she seems to have grown comfortable with us, even displaying a sense of whimsy from time to time. She shows a great eagerness to understand the peoples of the lands we visit...I suspect she seeks wisdom from the world to help untangle the chaos of her home. It would seem that in our travels, she has found a new heading.
Our uncommonly tall and beauteous trader and medicine woman, Dasha, traveled with us our first year but now lives with her clan in the Oamre Forest. I miss her dearly; we had become as sisters. Dasha was older than most of us, but newest to the wide world, tender-hearted and full of hope...sometimes impossibly so. It was Visatori’s will that our journeys briefly joined; it granted her courage to face what she had been fleeing and vanquish it. Now she is back where her heart is, where she will be happy.
​
What are your most prized possessions?
Though I do not own her, Viz Leany is the truest home I have had, or felt, in a long time. There are several things I have collected over the years, trinkets from my mother’s family, gifts my father gave me as a child, souvenirs from my own travels...some bring glad memories, others bittersweet.

I have acquired several more mementos over the course of our travels. While I do not have much occasion to wear it, I keep a beautiful fox costume made for Xien La's Fire Festival in my trunk. In Kuga, a family gave me a fishing charm for returning their young daughter who was bent on sailing away with us. In Bystenar, the Saloman family honored me greatly with the gift of a beautiful long knife after we helped bring a young man’s murderer to justice. I have a tooth from the great wight whale we helped slay in the Sea of Ice. Dasha gave me a lovely amulet as a farewell gift before we left the Larinovna in Calica. I have a beautiful jeweled necklace, a prize offered to me by my fellow winner Shadi in a dancing competition at Rhakosis' Festival of High Sun.

But my most prized possessions, I would have to say...are my drinking horn, a gift from Stig on my sixteenth birthday, and my hat, a prize won from defeating the great Captain Nickege Chegg in a nighttime race at the start of Viz Leany's maiden voyage.

What motivates you?
When I was a child, the greatest gifts my father brought home were the stories of the distant lands he visited. I have always wanted to see the world, to experience what I only dreamed of. I determined long ago that I would learn to master the Nine Seas, become the greatest sailor this world has known, and live a life worth living for.

How far would you go to achieve your goals?
I would go to the ends of the earth, and face any danger or hardship.

If you could choose how you wanted to die, how would you choose to go?
Ideally, in my sleep at reasonably old age, at or by the sea, surrounded by loved ones and leaving a wealth of great tales behind me. I would be satisfied giving my life in a worthy and noble endeavor, though.