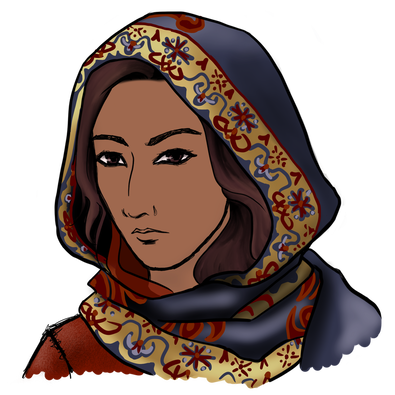 She winced as she clutched her side, blood blossoming over her clothing. Slowly pulling herself up into her stance, she raised her blade, her steely gaze an affirmation ahead of her answer.

“Only death will stop me.”

The crew first encountered the enigmatic Serrai when she initiated a contest of the blade at the Festival of High Sun in Rhakosis upon returning from their first voyage. Despite a contentious first meeting, Serrai has built something of a rapport with Mesi, and, for reasons unknown, agreed to assist Akash with recruiting manpower after his mine collapses.

A young Ash-Sh’b woman in her teens, Serrai binte Burhan Shafaq stands at an unassuming height, with straight black hair and a touch of the exotic around her intense, dark eyes. Between her cold allure and formidable presence, she is a very striking individual. Most find Serrai blunt and unyielding, though some may catch glimpses of a philosophical mind and a very dry sense of humor.

Since her father’s untimely death in an estate fire, Serrai has taken over her family’s mercantile affairs. Not much is publicly known about her, though there are quite a few interesting rumors regarding her family, and the fire. Serrai is most often seen in the company of a reticent, middle-aged Minzokan man, often assumed to be a bodyguard, though she herself carries a Minzokan blade. Her name has begun to spread amongst certain circles lately, since, over the past year, she has somehow managed to gain control over some of the smaller street gangs in the City of Sails.