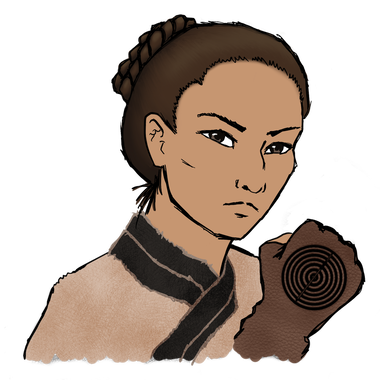 Nanako grew up on a small homestead on the Isle of Ash. She learned to fight at a young age, wanting to ensure she could care for and protect her single mother. Eventually she began to use her martial abilities to bring in money outside of the harvest season. After her mother died of illness, Nanako continued to work as a pit fighter even as she took over the responsibilities of managing the farm. Having ensured the stability of her homestead for the time being, she took a ship to the City of Sails.

​Though she came to Rhakosis under the guise of checking out their underground fighting rings, Nanako had an ulterior motive. Her lucky boxing gloves her mother had left her were embossed with what appeared to be a Minzokan family crest: a series of concentric circles bisected by spear. Having no knowledge of the family her mother had left behind to live in the Free Isles, she searched for someone who might have more information about such things. She learned of the sage Mahfuz, and tangentially the crew of Viz Leany. Learning the party was searching for the sage after his disappearance with their property, Nanako decided that teaming up with them would likely produce better results.

Nanako’s partnership with the crew of Viz Leany was not without its troubles. Utilizing different methods than the party—more the hammer than the scalpel—she often butted heads with them, and particularly with Kasumi. Nanako also learned more of the strange object the party had lost with the sage’s disappearance, which also seemed to have a connection to her mother’s family.

In addition to joining their investigations, she accompanied the crew on their journey with Captain Ataullah of High Tide to prove themselves before the Jinn by crossing the Entrance to the Sea Lord’s Hall. Upon their return, the crew traveled north to address problems at Akash’s mine while Nanako remained in Rhakosis to resume her search for the missing sage.

Though her efforts to locate Mahfuz turned up more questions than answers, Nanako did not feel her trip was entirely in vain. She returned to the Free Isles with a dog to help watch over her crops and livestock, as well as the name of her mother’s mysterious clan: Ryuu.