The Nine Seas of Nyasia

In reality, the "seas" are really just the different claimed areas of a single ocean. However, the different seas are used to distinguish the different areas to which a sailor may have traveled. From north to south they are named as follows: 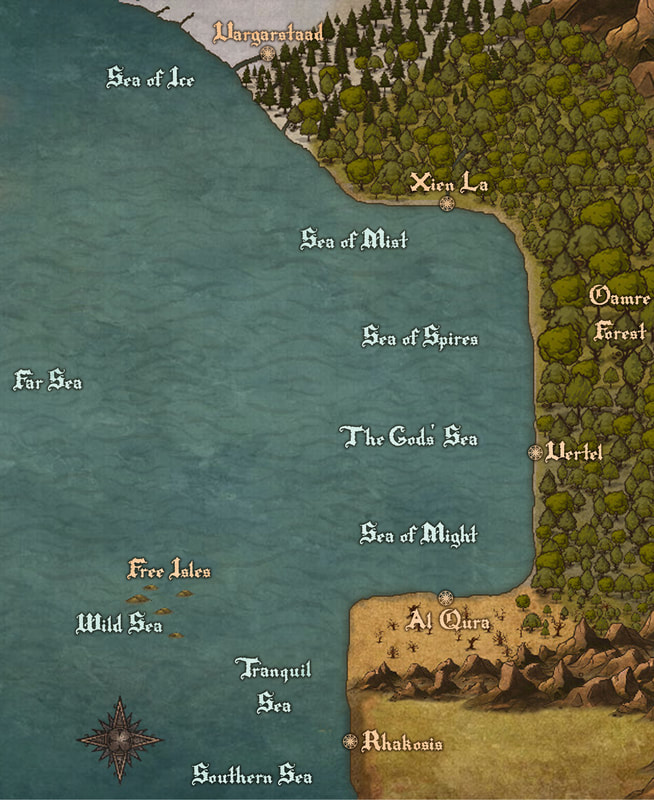 Sea of Ice - Also known as the Sea of Wolves by those who have been attacked by Skenden Raiders (an activity that has all but ceased since the end of the Long Dark). The dangers of the Sea of Ice include the icebergs that dot the area as well as some of the more aggressive ocean beasts that have been known to attack ships.

Sea of Mist - Taking its name from the prevalence of fog, the Sea of Mist is difficult to navigate thanks to very poor visibility.

Sea of Spires - Due to a strange trick of the light, the towering trees of the Oamre forest appear to sprout directly from the ocean.

The Gods' Sea - Named to honor the gods of the Dasceans, often used sarcastically by sailors of other religions.

Sea of Might - Also known as the Sea of Bones, considered by some to be a rather ostentatious name for a country that lacks a meaningful navy, the other name is credited to either the strange rock formations that dot the sea, or the bones of slaves disposed of in the sea.

Tranquil Sea - So named because, being sheltered by the Pirate Isles, it is the least storm tossed of the seas bordering Nyasia.

South Sea - The sea to the south of the Ash-Sh'b desert, it is bordered by an imposing cliff face for as far south as anyone has cared to venture.

Wild Sea - The sea surrounding the Pirate Isles, known to contain a handful of large islands and innumerable smaller ones used as hideouts by those who prefer not to be found.

Far Sea - Past the coastal trading routes and the Wild Sea, in the direction of the Old World. those that have ventured out have reported nothing but a caustic, unnatural fog. None who have attempted to travel through it have returned.